Over the years games have become central to our homeschooling. We play at least two games daily, and have found them to be a wonderful way for the kids to learn practically and gently. They also provide great opportunities for us to learn together, forging memories, fostering closeness, and teaching the kids to respect one another.

For those of you also on the parenting journey, here’s a list of some of our favorites, categorized by subject. We often supplement knowledge-based games with a book to go deeper. If you have kids of multiple ages, like we do, you can still get them both playing if you help out the younger or add harder rules for the older, etc.

Bean is a very hands on learner, so phonics games were key to jump-starting her reading. They were by no means sufficient, and she’s made the most progress from simply reading easy readers with attentive guidance, but games offered her a supplemental approach that played well into her strengths and enhanced her facility with zero stress. 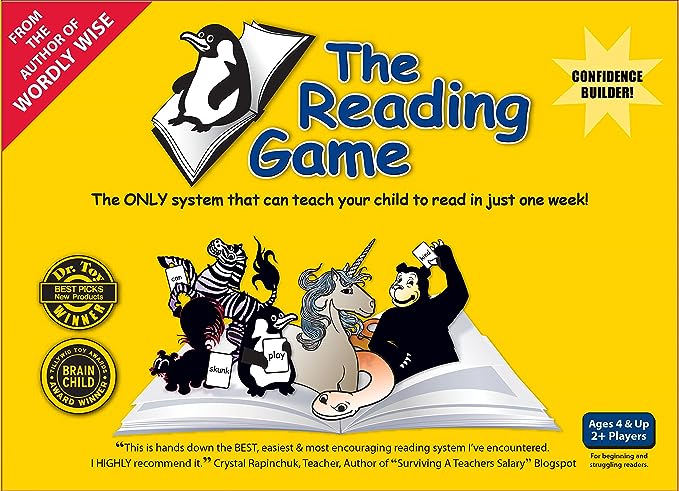 The Reading Game  claims to teach kids to read in a week. We didn’t take on that challenge (what’s the rush??), but instead used the matching games included in the kit to help Bean practice figuring out phonemes. 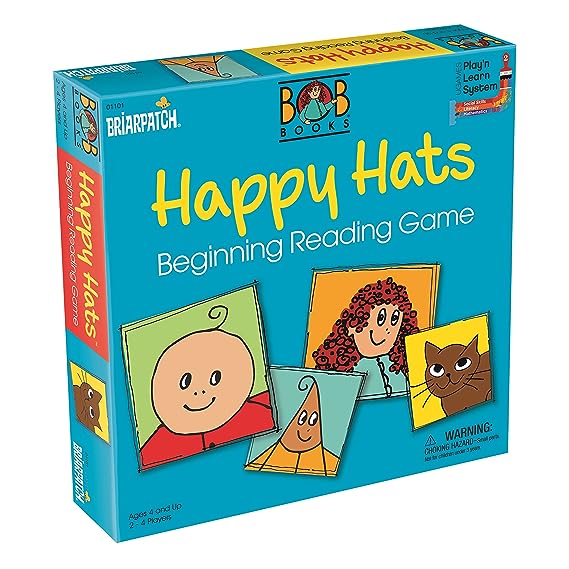 Happy Hats was designed by the authors of BOB Books. It offers a fun way for the just emerging reader to develop facility with CVC words. 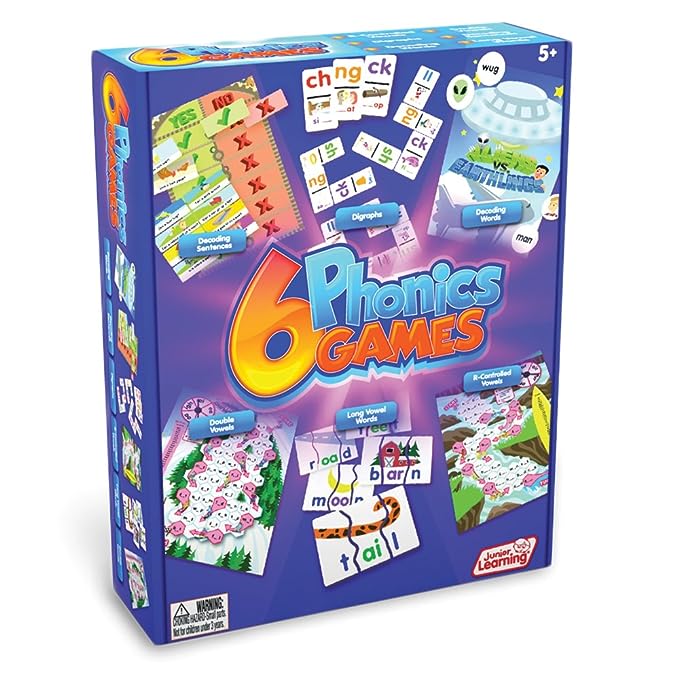 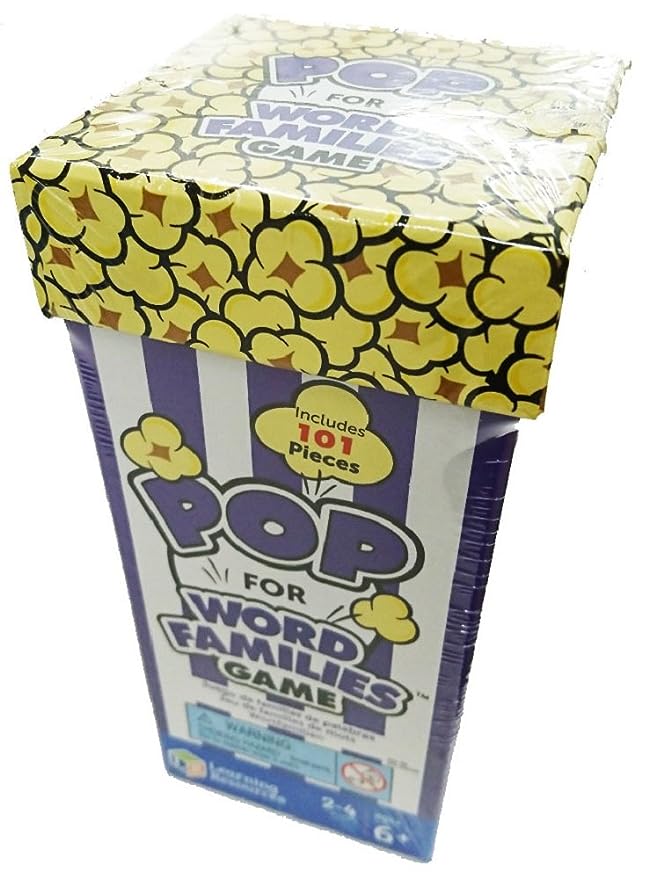 Learning Resources Pop Games come in several varieties, all meant to facilitate fluency with decoding. We’ve had fun with the word families version. 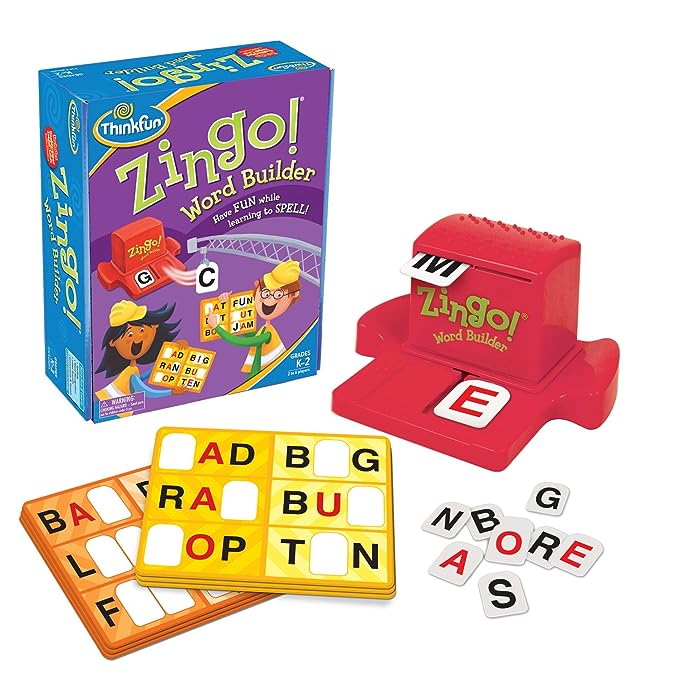 Pip learned grammar by playing DK Silly Sentences and doing Mad Libs. No joke. This game is super easy to pick up and gets kids laughing while they learn.

We play a lot of math games. Especially in the early years, I’ve found math games are hugely helpful for developing number sense. 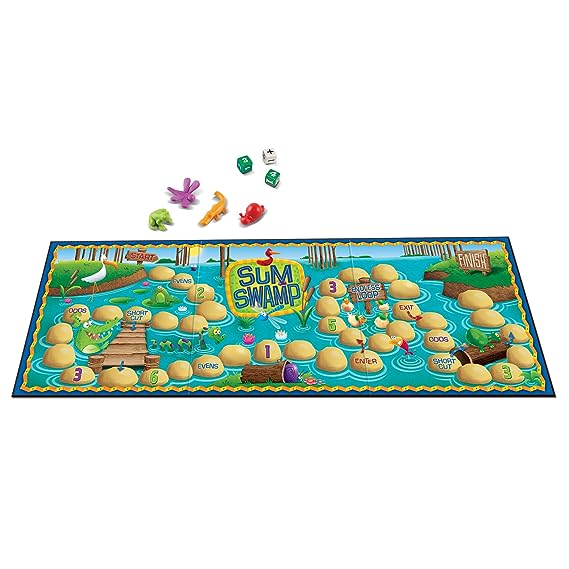 Sum Swamp has been a staple in our family for years. I swapped out the 6-sided dice for 10-sided, so the kids can practice addition and subtraction facts up to 10. In the early years, I’ve had the kids figure out the operations using manipulatives. 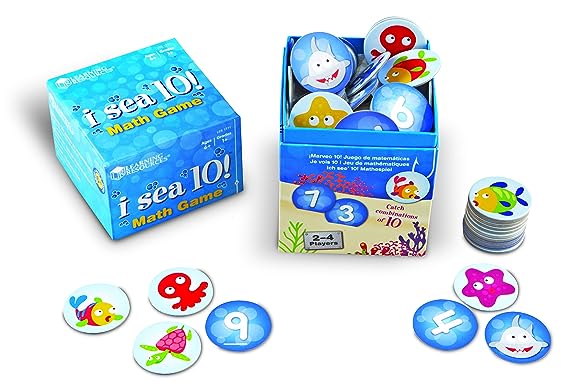 Bean learned her facts adding up to 10 exclusively from playing this game. I Sea 10! is fun and easy to pick up. 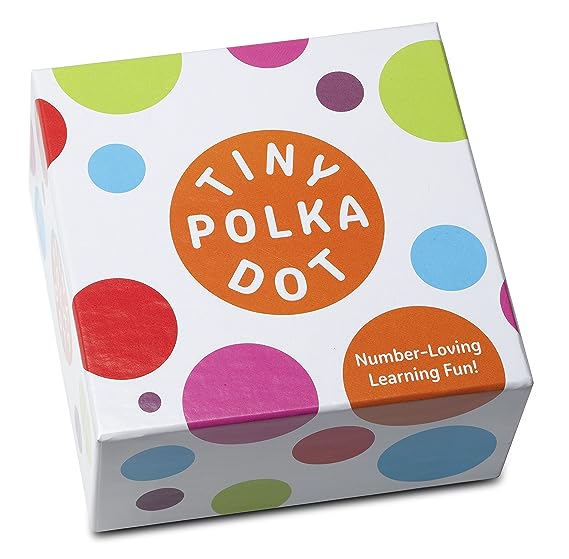 Tiny Polka Dot offers 16 games in one, for preschoolers up to the middle grades. It was hugely helpful in teaching Bean to understand numeral symbols, and continues to be a good resource as she learns addition and subtraction. 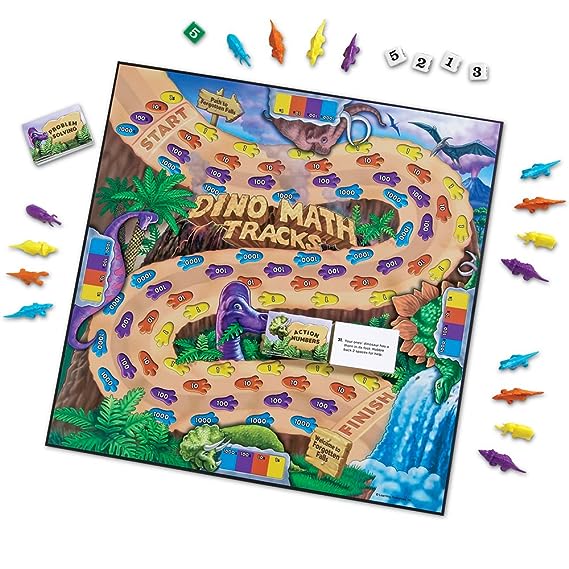 Dino Math Tracks has helped both kids understand place value. There are problem cards to solve that are helpful for pushing older kids further, while your youngest is still figuring out digits. 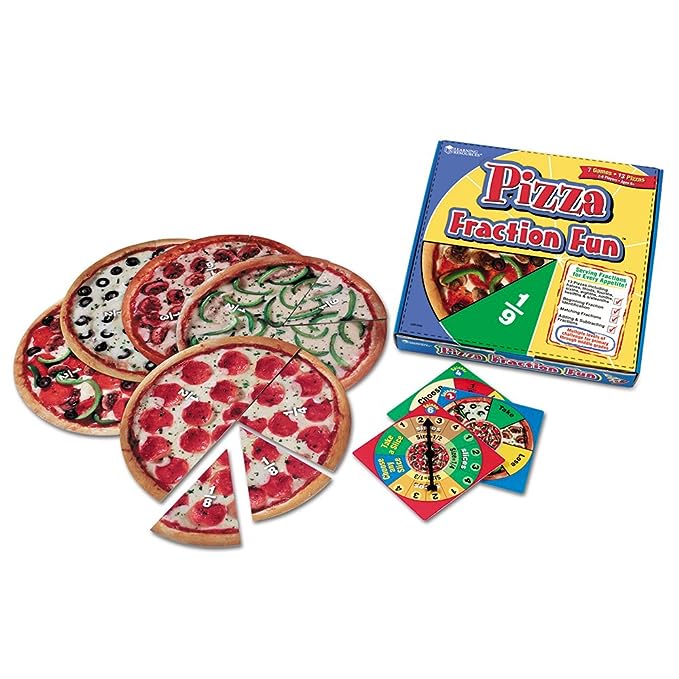 Pizza Fraction Fun offers several levels of difficulty, and is a great visual way to increase understanding of fractions. 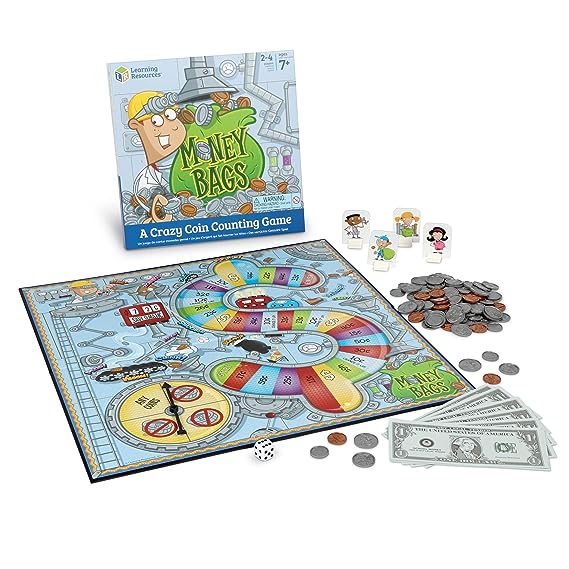 Money Bags is a fantastic way to increase comfort level with coin values! 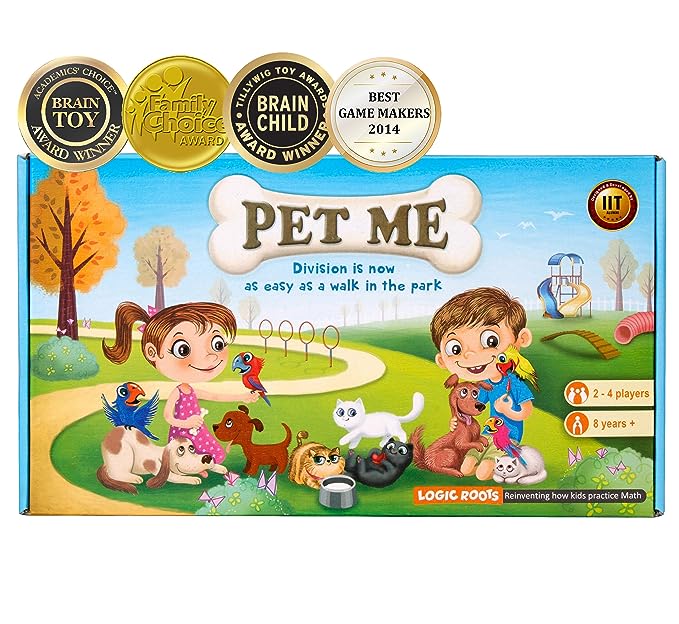 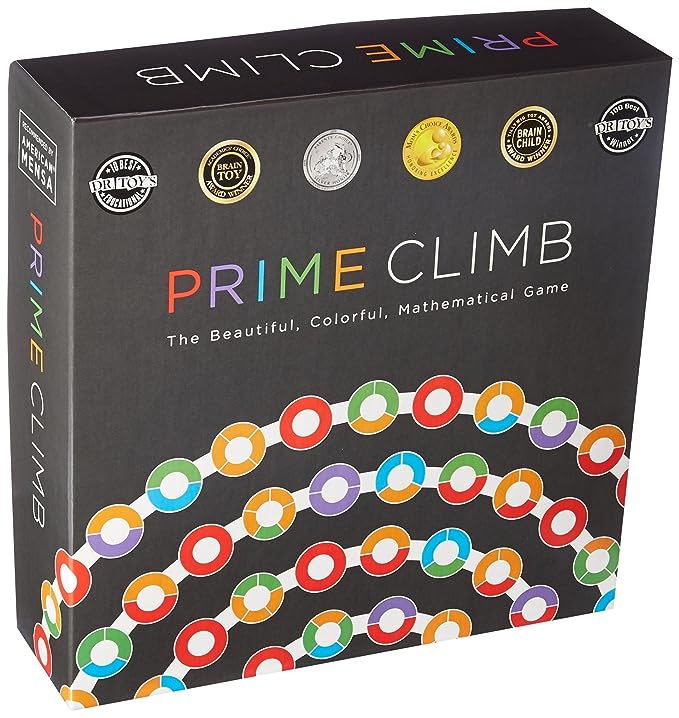 Prime Climb is definitely geared toward older learners who are comfortable with multiplication and division. . . but, you can still play it with younger kids if you assist them. It’s been great choice for us because it engages Pip, but is also something Bean can tag along and do with my help. 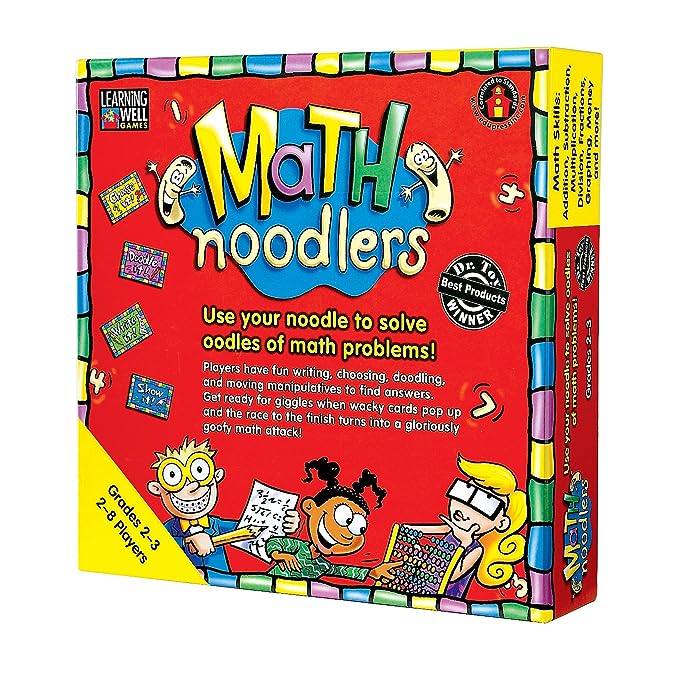 Math Noodlers comes in versions for grades 2-3 and 4-5, and is another one both kids can play because although the questions are geared for those well versed in basic arithmetic operations, it includes manipulatives that younger kids can easily tackle with guidance. 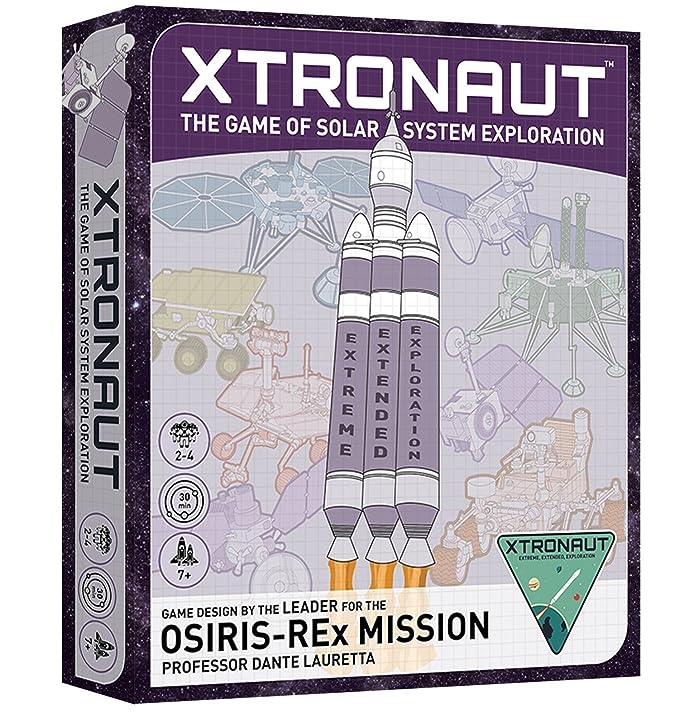 Xtronaut is currently Pip’s favorite game. Designed by an astrophysicist, it allows players to assemble rocket ships to complete missions to various bodies in the solar system. Yeah, cool. We’ve supplemented our play with readings from various astronomy encyclopedias and a book on rocket ships. Little ones will need help, but middle grade kids should pick up the play after a couple iterations. 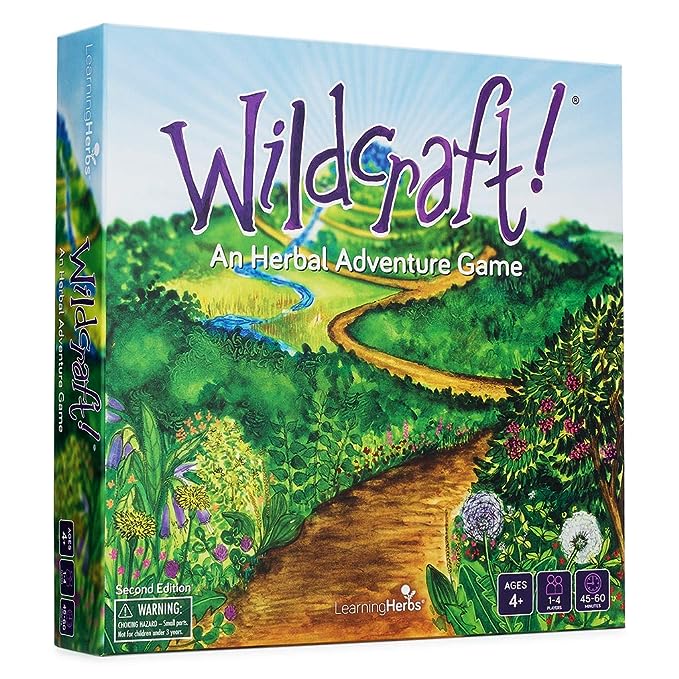 Wildcraft is another one of Pip’s favorites. During this cooperative game, players walk through a forest, collect plants, and draw “trouble” cards — ranging from burns, to bug bites, to hunger — which they need to address with the plants they’ve gathered. The game doesn’t offer a lot of depth, but sparked enough curiosity that we purchased a couple field botany books to delve deeper into what the game introduced. 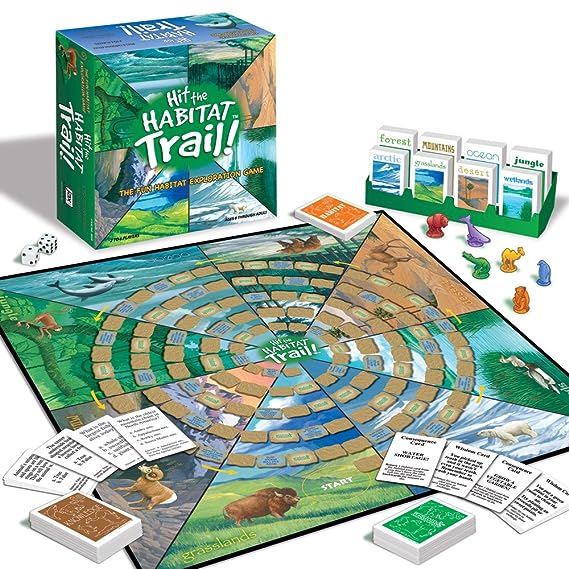 Hit the Habitat Trail is another trivia/ knowledge-based game that focuses on conservation and animal biology. The questions are a bit tough, but the kids definitely learn from them, and the game has enough momentum that their wrong answers never seem to daunt or discourage them. We supplement with animal encyclopedias to go deeper. 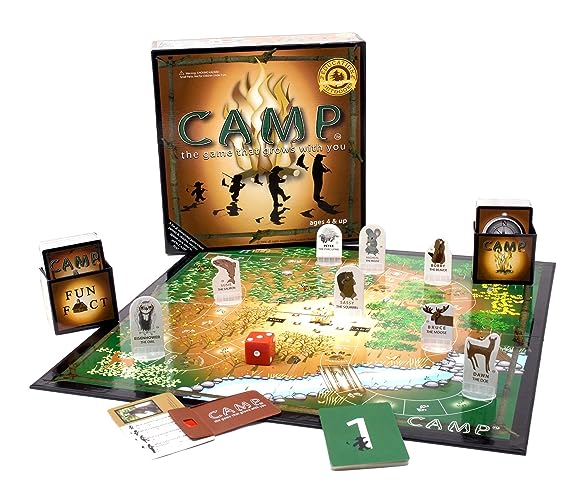 Camp is another fun animal trivia game, with four different levels of questions such that multiple different ages can play. 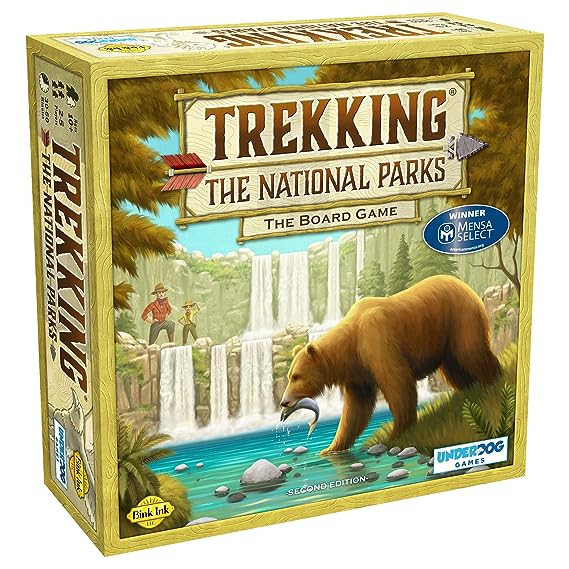 Trekking the National Parks is similar in its gameplay to Ticket to Ride (for any gamers out there!). It offers facts about the U.S. National Parks and Forests. The game is pretty pricey, and we only purchased it with an Amazon gift certificate, but when paired with a National Geographic or Ranger Rick book on the national parks it makes for fun & educational play. 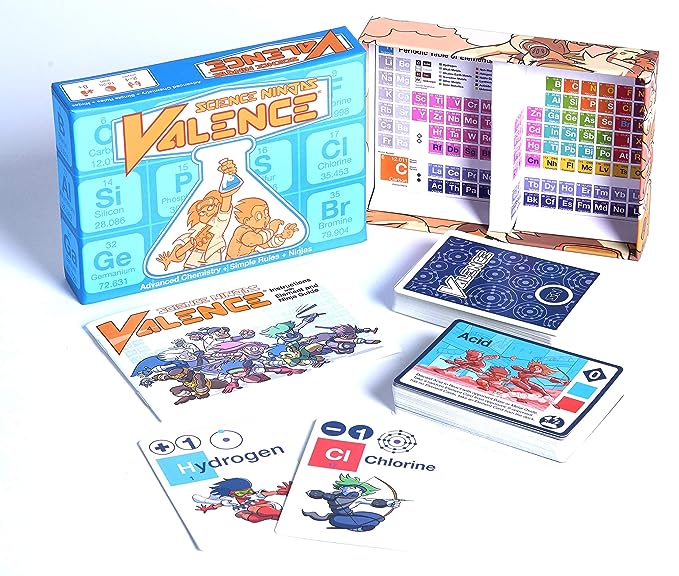 As a former chem nerd, I realize I’m biased. . . but I still think Valence is pretty cool. 🙂  Younger learners will have a bit of trouble with it, but middle graders on up should find it a fun way to learn some basic chemistry. Chemistry, cards, and ninjas — what’s not to like? 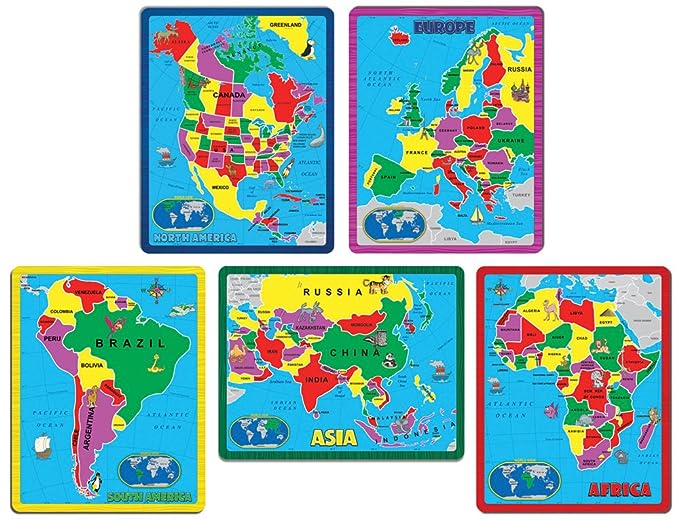 These puzzles don’t exactly qualify as games, but we’ve gotten so much use out of them that I’d be remiss not to include them. Pip learned world geography effortlessly from doing these puzzles, first with me, and then on his own, and Bean isn’t far behind. 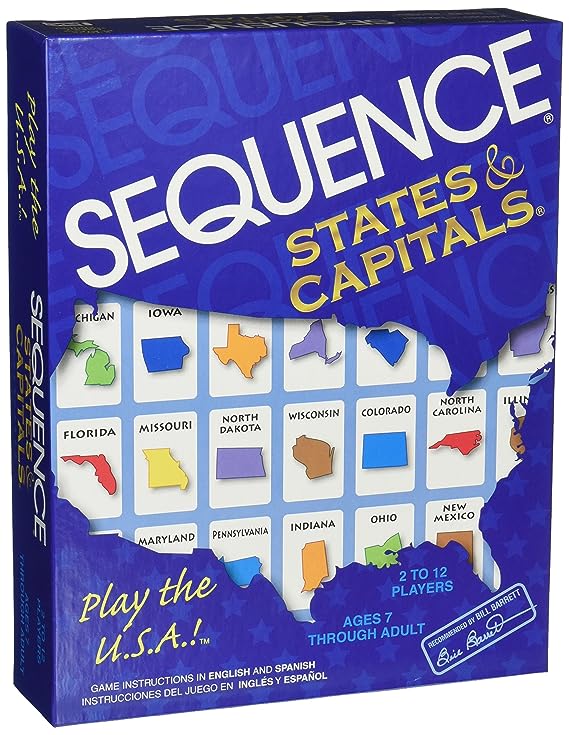 Sequence States & Capitals offers an educational take on an old classic. You’ll be surprised how quickly the kids start to identify states by shape when playing this game. 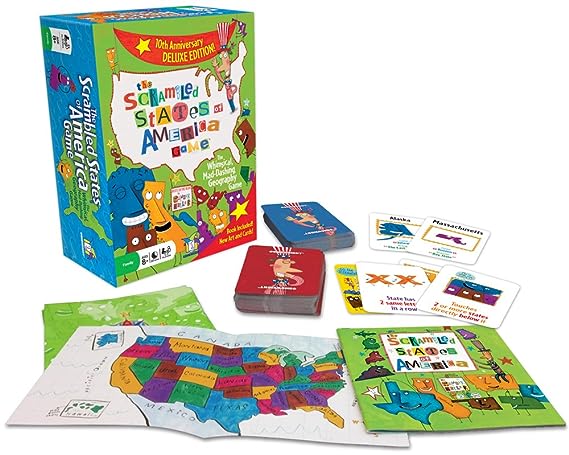 Zany and mildly hilarious, Scrambled States of America is a fast-paced game that reviews states and their capitals. 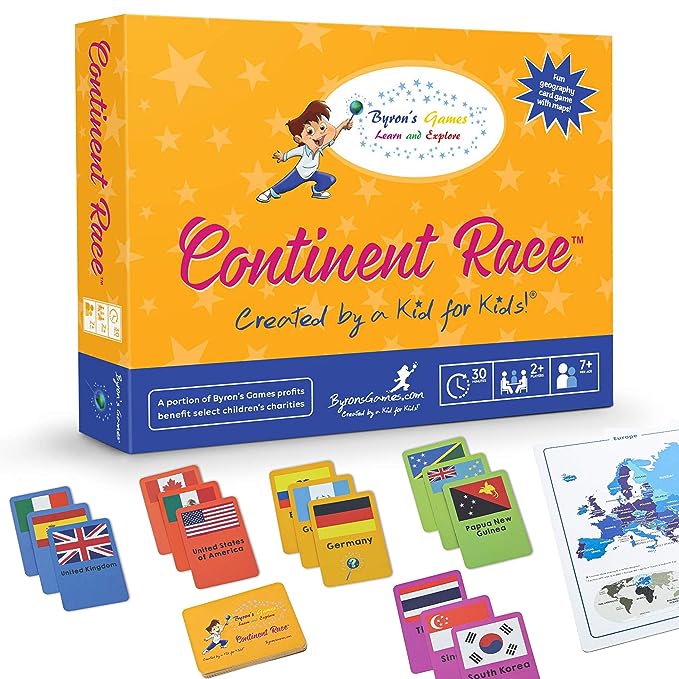 Not only was Continent Race designed by a kid, and not only do its proceeds go to children’s charities, but it includes every. single. country in the world! 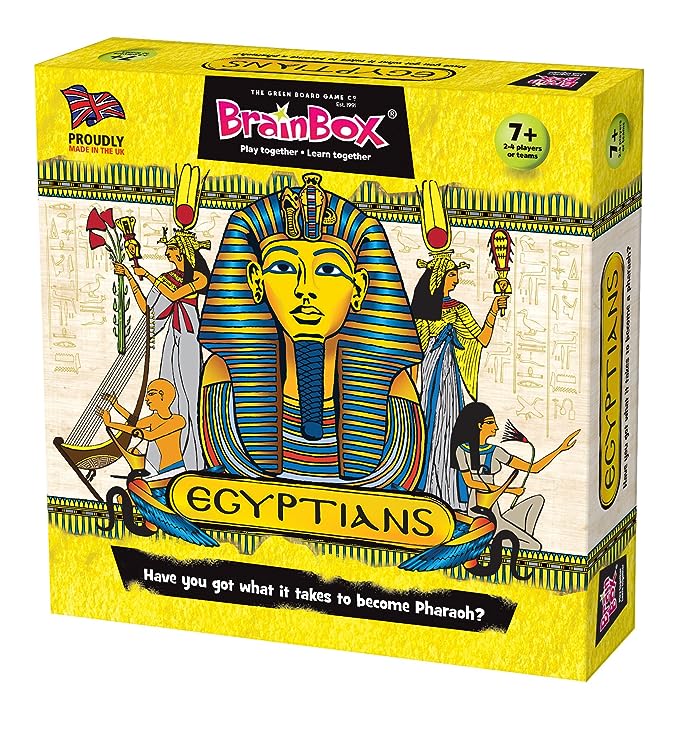 We bought Egyptians when Bean was in an ancient Egypt craze. It’s similar to Monopoly, with an Egyptian twist. The facts are often advanced, but the gameplay is simple enough for all to participate. 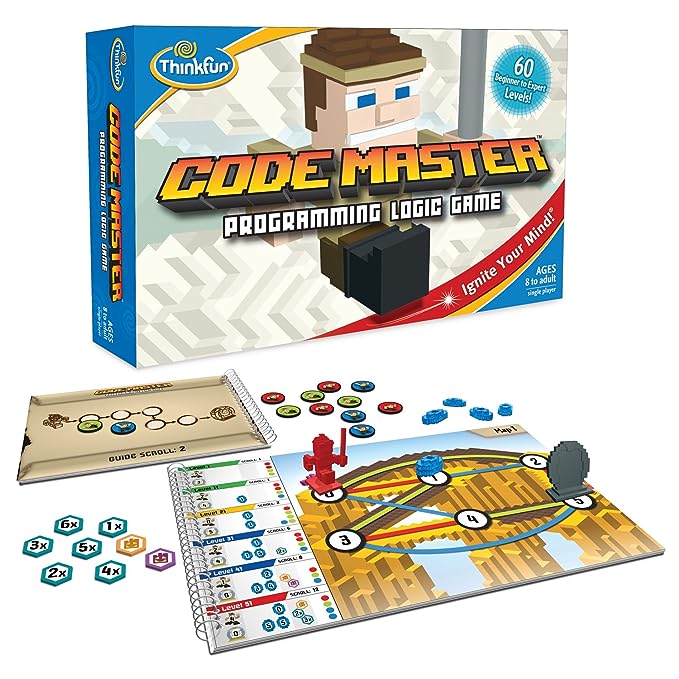 CodeMaster is actually a single-player game, but Pip loves it so much that I had to include it. It offers an introduction to  programming by giving players goals to sort out according to a set of rules. Great for fostering critical thinking skills. 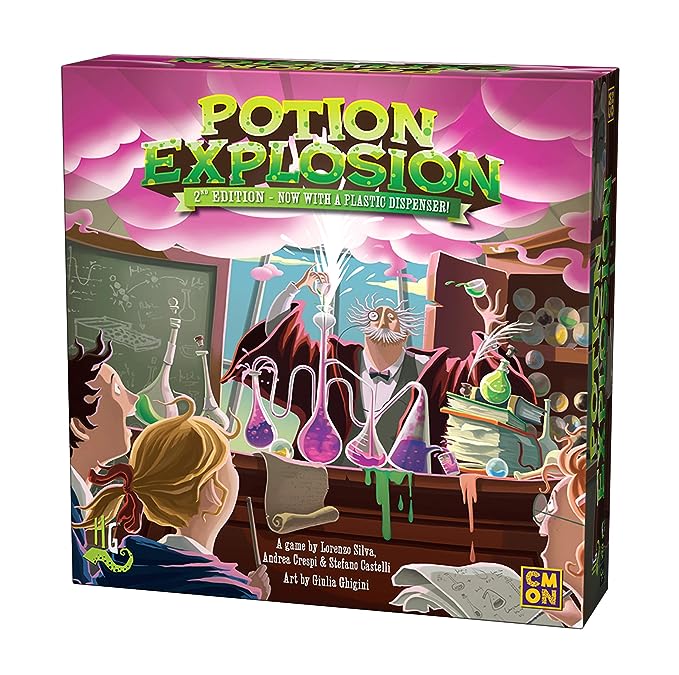 Potion Explosion  is another pricier game we saved up for, but fun for everybody, even though it’s geared toward older kids. 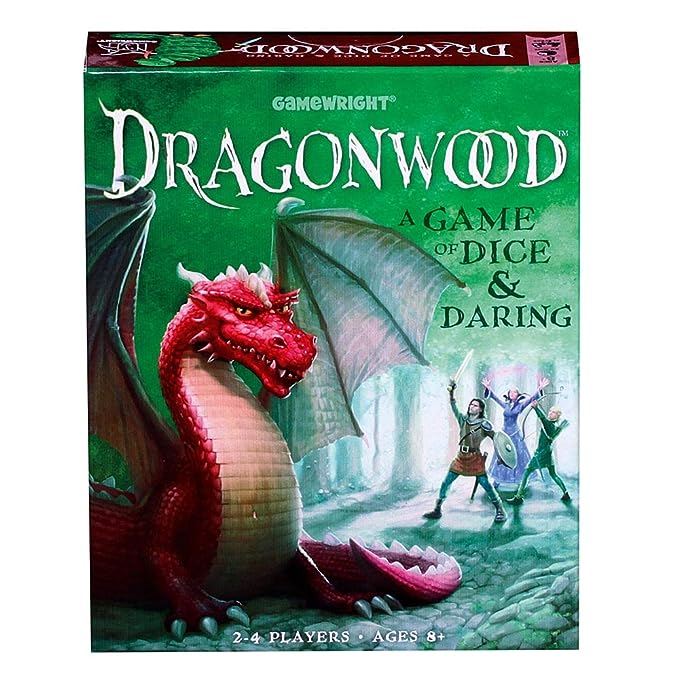 Dragonwood is one of our favorites. Rather than keeping the cards secret, have younger learners fan them out and help them play. Probability, mythical creatures, gooey globs, oh my! 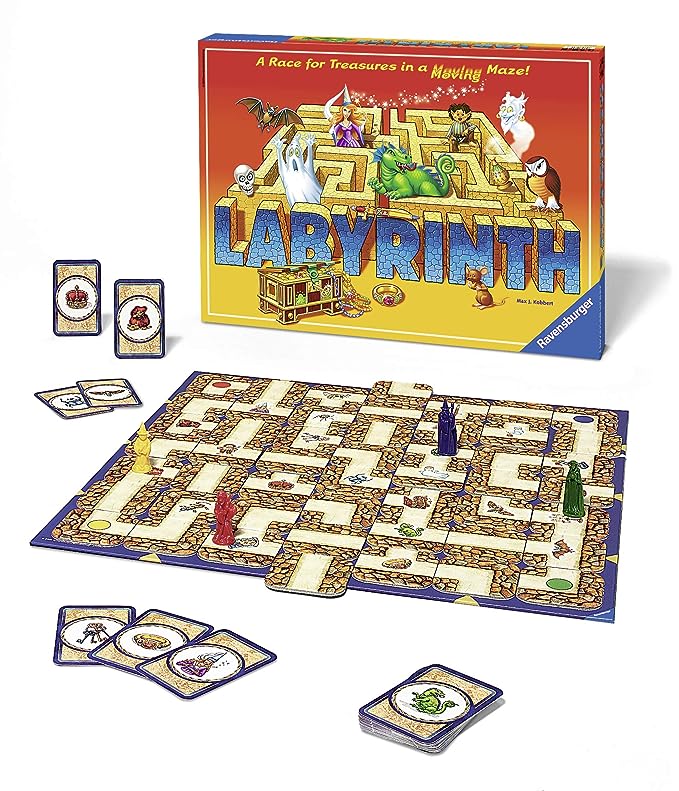 Labyrinth and it’s counterpart Labyrinth Junior pit players against one another to capture treasures in a moving maze.

Other frequent games are the usual classics — Pip is learning to play chess; Bean loves & Chutes and Ladders; Pip likes Yahtzee, etc. My husband and I also frequently play games, and we’ll include the kids on select examples (Pip often joins for Forbidden Desert and Castle Panic).

I didn’t anticipate, when I was first devouring homeschooling books, how prominently games would feature in our household. And I wouldn’t trade the togetherness, the fun, and the learning for any shrink-wrapped curriculum!